How well does the QLattice deal with highly correlated features in omics data?

In this tutorial we will be exploring this question with a problem and a dataset from the field of liver cancer diagnosis. Namely, classifying Hepatocellular Carcinoma patients using methylation biomarkers as features. This specific example is taken from a study by Wen, Li, Guo, Liu et al. and contains data generated by methylated CpG tandems amplification and sequencing (MCTA-Seq), a powerful method that can detect thousands of hypermethylated CpG islands (CGIs) simultaneously in circulating cell-free DNA (ccfDNA).

The original dataset contains thousands of features (CGIs). However, as you will see the model will achieve very high performance with only a handful of them.

Note, the data has been preprocessed and only includes features with high variance. The final curated dataset contains 1712 CGI features with a binary target of 55 cancer-free (0) and 36 cancer (1) individuals. The CGI-features cover the methylated alleles per million mapped reads.

From here we choose the best fitting graph on the training set as per the bayesian information criterion stated in the ql.auto_run()-call. The bayesian information criterion is used as a balancing measure between fitness and complexity, penalising more complex models. We are looking for simple models because of their tendency to generalise better to unseen data – following the Occam's razor principles.

This two-feature model is the top performer and delivers an almost perfect AUC-score on our holdout-set. Notice that in this process we are boiling 1712 features down to two, drastically removing redundant variance.

In our terminology, model is just another word for mathematical formula. We can print our model as a mathematical function with the sympify call as shown below.

Why would our graph pick up these two features?

Let's have a look - the seaborn pairplot is a useful tool for this. The pairplot shows the density and scatter plots revealing the relationships between the features. 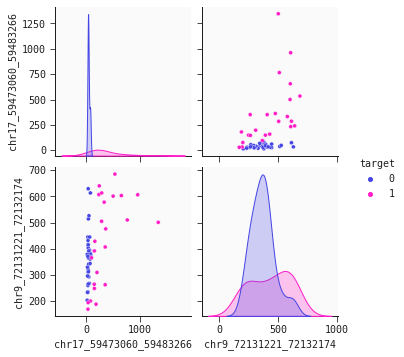 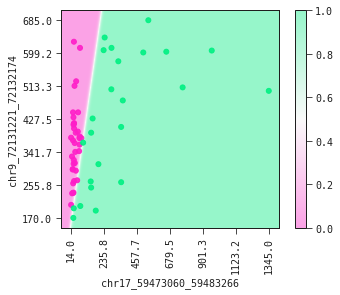 There might be competing models with similar performance metrics – especially in a case like this, where there are many features with potentially high correlation between them. This phenomenon is also known as multicollinearity.

In the following code we will plot a correlation heatmap of the data in an attempt to understand how the QLattice is finding high performance with only two features. 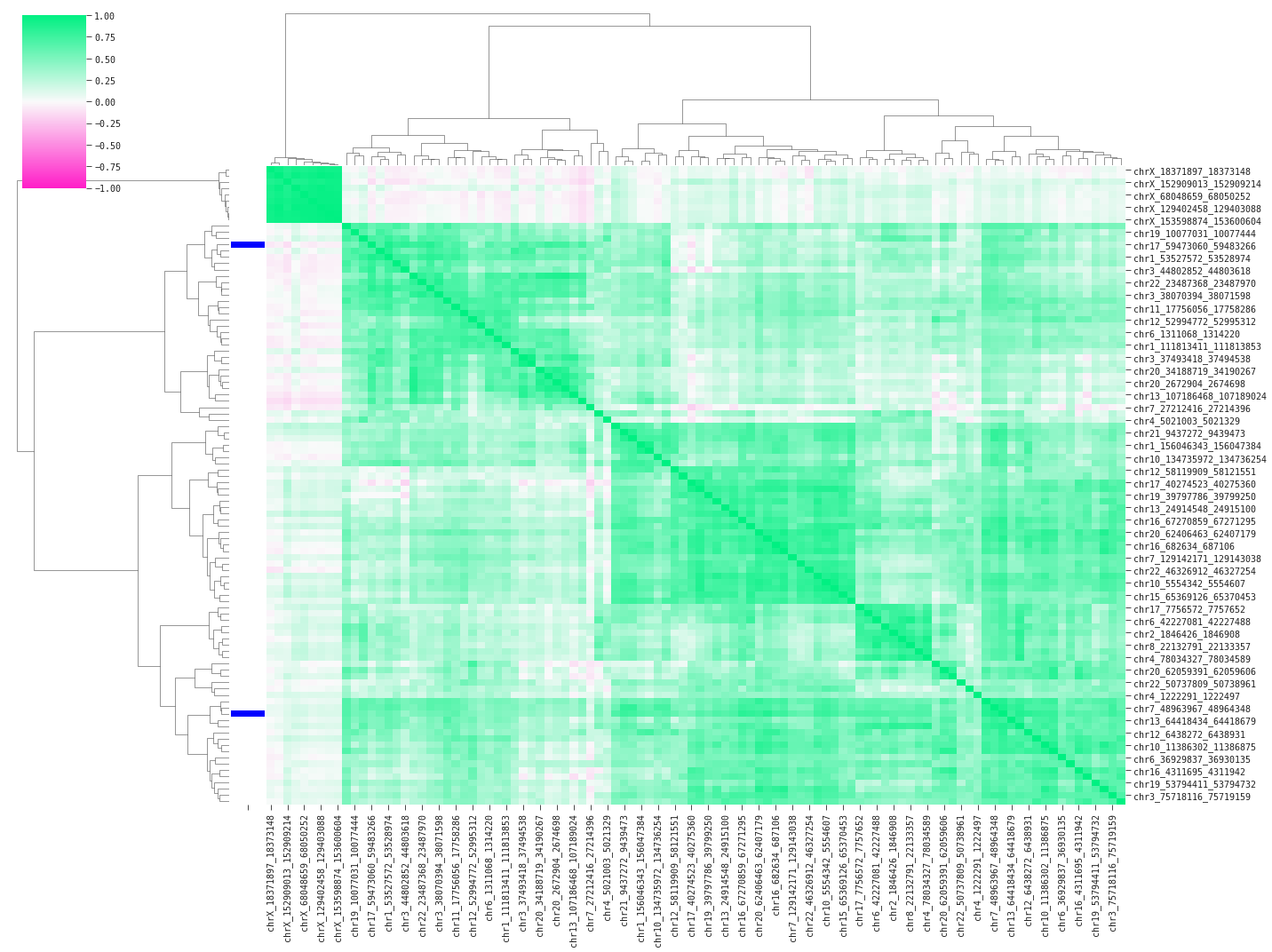 Above we are displaying pairwise correlations between a random subset of 100 features including the two model features (blue bars on the left). The heavy green colors indicate high positive correlation between the features; multicollinearity confirmed. The plot clusters the features based on similarity – in this case using pearson correlation – and sorts the features accordingly. We find two main groups of linear feature variance as displayed by the top branches in the dendrogram. You could suspect the QLattice digging for signal in the available variance across these groups, and it turns out that QLattice does exactly that by picking one feature from each main group.

In this tutorial we have gone through the QLattice workflow for exploring the relationships in our omics data. In 10 minutes of modelling time we have gone from 1712 features to pinpointing two features that in conjunction provide a competetive and interpretable model.

We have made use of a range of in-built plotting functions that have helped in interpreting our model and the relationships between features. We are now in the position to build on our findings to further improve our working theory and ultimately our predictions.

At Abzu we are exploring similar use cases to help researchers understand the underlying mechanisms in their omics data. If you are dealing with similar challenges why not reach out and/or sign up for a QLattice trial?

← Deploy a model for inferenceClassifying toxicity of antisense oligonucleotides →