However one can imagine situations that you want a classifier that does not predict a positive class unless it is very sure. Here you would increase the threshold from 0.5 to something much higher say 0.8. Then the classifier would only predict positives when it was nearly certain but this comes with cost that the classifier will miss some positives.

The receiver operating characteristic (ROC) captures how the classifier behaves with different thresholds. This gives a good indication where to make the best trade offs.

We can plot a particular threshold on the curve and find out the metrics of the classifier (accurarcy, F1 score, Precision and recall) at this threshold 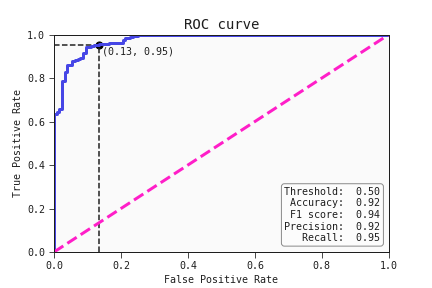 This function can also be found in feyn.plots module.